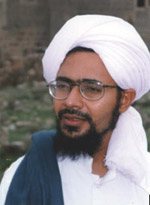 Habib Umar was born in Tarim, Hadramaut one of the ancient cities of Yemen that became known far and wide due to the abundance of scholars and pious people that it has produced over the centuries. He was raised in a household that possessed a tradition of Islamic scholarship as well as righteousness with his father being the famous martyr, the Erudite, the Preacher, Muhammad bin Salim bin Hafiz bin Shaikh Abu Bakr bin Salim. His father was one of the scholars of Islam that dedicated their lives to the spread of Islam and the teaching of the Sacred Law and the lofty teachings of Islam. He was tragically abducted by communist forces and presumed dead, may Allah have mercy upon him. Likewise his grandfathers al-Habib Salim bin Hafiz and al-Habib Hafiz bin Abd-Allah were scholars who were highly respected by the scholars of their day. Allah prepared appropriate conditions for al-Habib ‘Umar in terms of both his connection with the people of knowledge and piety from within his very household as well as the environment and society in which he was raised.

Having memorised the Qur’an at a very early age he also memorised the core texts in fiqh, hadith, Arabic Language and other religious sciences thereby adhering to the circles of knowledge that were held by many traditional scholars such as Muhammad bin ‘Alawi bin Shihab and al-Shaikh Fadl Baa Fadl and other scholars who taught at the famous Ribat of Tarim. Naturally he studied many sciences including the spiritual sciences from his father the martyr al-Habib Muhammad bin Salim acquiring from him a deep love and concern for da’wah and religious counsels in the way of Allah. His father paid a lot of attention to the young ‘Umar with him constantly being at the side of his father in circles of knowledge and dhikr. Tragically al-Habib ‘Umar accompanied his father to the Jum‘ah prayer from which he has abducted by the communist forces, with the young ‘Umar returning home alone with his fathers shawl, with his father never to be seen again. Thus the young ‘Umar began to assume the responsibility of continuing the work done by his father in the field of Da‘wah it was as if his fathers shawl was a banner which he had given to his youngest child before being martyred. Thus, with the banner held aloft he began, vigourously, the arduous journey of exhorting the people, arranging conferences and da‘wah. His vigourous attempt at continuing the work of his father began to bear fruits. Classes were being held for the young and the old in local mosques where opportunities to memorise the Qur’an and to study the traditional sciences were being offered. He indeed had grasped the Book firmly it being evident that he had been given something special from Allah despite his young age. This however began to cause great concern for his safety with it eventually culminating in him being sent to the city of al-Bayda’ which is situated in the then North Yemen away from the grasp of those who may wish to inflict harm on the young sayyid. There began another important phase in his development. Enrolled at the Ribat of al-Bayda’ he began to study the traditional sciences under the expert tutelage of the great al-Habib Muhammad bin ‘Abd-Allah al-Haddar, may Allah have mercy upon him, as well as under the Shafi‘i jurist and scholar al-Habib Zain bin Sumait, may Allah preserve him. His promise was confirmed when he was appointed as a teacher soon after. Likewise he continued his exhausting efforts in the field of Da‘wah. This time the scene was to be al-Bayda’ and her neighbouring towns and villages. No stone was left unturned in his attempt to revive the love of Allah and His r Messenger in the hearts of the people. Classes were established, lectures were held people were counseled. His work which deprived him of much sleep and rest began to have a major impact on all those that came in contact with it, especially the youth who previously had been resolved to a empty and shallow life but now had undergone internal transformations to the point that life now had a purpose, they were proud of their new found Islamic identity wearing the cloaks of Islam and beginning to focus their attention on acquiring the noble traits of the Messenger of Allah r. Thus a large group of people from those he had influenced began to gather round him assist him in his da‘wah efforts and teaching commitments in various cities and towns in Northern Yemen. Within this period he began to visit many neighbouring towns and communities across Yemen from the northern city of Ta’iz in order to take knowledge from the mufti of Ta‘iz al-Habib Ibrahim bin Aqil bin Yahya who began to show him much love and attention likewise he received similar treatment from his Shaikh al-Habib Muhammad al-Haddar to the extent that he gave him his daughters hand in marriage after having noticed in him the lofty traits of uprightness and intelligence.

It was not soon after that he set out on the arduous journey to perform the prescribed pilgrimage to Makka and to visit the Prophet r in Madina. During his trip to the Hijaz he was blessed with the opportunity to study several books of their most prominent scholars especially those of al-Habib ’Abdul Qadir bin Ahmad al-Saqqaf who saw in the young ‘Umar a youthful vigor full with of the love of Allah and his Messenger r totally absorbed in the spread of knowledge and righteousness amongst mankind such that he became endeared to al-Habib Abdul Qadir one of his greatest teachers. Likewise he was blessed to have received knowledge and guidance from the other two pillars of righteousness in the Hijaz al-Habib Ahmed Mashur al-Haddad and al-Habib ’Attas al-Habashi.

Thus the name al-Habib Umar bin Hafiz began to spread far and wide in the land especially due to his unrelenting effort in establishing the call to Islam and reviving its traditionally based teachings this mass popularity did not in any way detract from his academic endeavors on the contrary it provided him with an additional source from which high aspirations could be maintained. No time was wasted, every moment was filled with the remembrance of Allah in its multiple manifestations and in its differing situations and locations. His overt concern with the spiritual development of especially those who kept his company was to become one of his most distinguishing traits one for which his name would spread even as far as the New World.

The land of Oman would be the next phase in the move towards fifteenth century renewal. After responding positively to the invitation of a group of Muslims who possessed a deep desire to benefit from his teachings he left the land of his birth and was not to return for several years. Seeds of erudition and piety were sewn as well in the eastern Yemeni town of Shihr, his first stop on his return to Hadramaut Yemen. There his teachings began to crystalise in the development of the Ribat al-Mustafa. This would be a major turning point for and it could signal in more ways than one the completion of the theoretical aspect of this work and the bringing forth of tangible realities that would embody the prophetic teachings.

The return to Tarim would signal a metamorphosis of all those years he had spent in learning, teaching, in the development of others spiritually in the establishment of the call and enjoining the right and forbidding the wrong. Dar-al-Mustafa would be his gift to the world and to it the world was summoned. In what would seem such a short time the people of Tarim would witness the convergence of students from lands far and wide upon a city that was on the verge of being forgotten whilst under the rule of communist infidels. Students from Indonesia, Malaysia, Singapore, The Comorus Islands, Tanzania, Kenya, Egypt, Great Britain, Pakistan, United states and Canada as well as other Arab states and countries would be under the watchful eye of Habib Umar. They would become agents in what is now becoming an authentic attempt at reviving traditional Islam in the fifteenth century after the flight. The rise of similar Islamic institutions in Yemen and abroad under the management of al-Habib Umar would again be a major impatice in the spread of Knowledge and good behavior and provide the common people with opportunities that they had previously been deprived of.

Habib ‘Umar currently lives in Tarim Yemen where he oversees the development of Dar al-Mustafa and the many schools that have been set up under his management. He still maintains an active role in the propagation of the religion of Islam such that he may spend most of the year traveling all over the world in pursuit of such noble activities.

This information, courtesy of the Ibn Abbas Institute, is correct as of 15 December 2002